How to Identify if a Spider is Dangerous or Safe

Australia is home to some of the world’s most extreme and wondrous wildlife. Unfortunately, venomous spiders that will stop at nothing to bring harm to humans are some of these species. The good news is that Australia’s reputation for dangerous arachnids is far worse than its bite. Every Aussie has spotted a spider in the home at least once in their lives, and almost all have lived to tell the tale.

Still, it’s better to be safe than sorry. Here’s how to identify if a spider is dangerous or safe. If you’ve been bitten, take a photo of the spider and immediately seek medical help.

Most spiders down under are icky, scary creatures that you don’t want anywhere near your home. However, only two species are actually dangerous: the funnel-web and the redback.

There have been no recorded deaths from spiders since 1979, so we must be doing something right!

So, it’s safe to assume that a spider is dangerous if it is one of these two species, and relatively harmless otherwise. A bite from a regular spider will still hurt, but it won’t put you in serious danger.

How to Identify a Funnel-Web Spider

Funnel-webs are probably the most dangerous spider in the world. A bite can cause a serious reaction. Thankfully, science has produced a cure that has eliminated this threat (that doesn’t mean we recommend getting bit).

They are normally 1.5cm-3.5cm in size and are black/blue-black in colour. They have large, powerful fangs and a shiny head. Beware: they are aggressive.

The Sydney funnel-web is the most common and dangerous, but there are other species Down Under. Other funnel-web spiders will be the same size as their Sydney cousins but can range from black to plum brown in colour. Keep your eyes peeled.

Redbacks are far more common (but less dangerous) than the funnel-web spider. They are found throughout Australia and even in urban neighbourhoods. Their bites cause severe and persistent pain, but not all are life-threatening.

The female is more dangerous than the male and has a distinct red stripe on her abdomen. She will be about 1 cm in length and have large, sprawling legs. The male is about 3-4 cm and has a brown hue. Males have a white marking on the upper side of the abdomen and an hourglass marking underneath.

In Australia, it’s easy to identify if a spider is dangerous or safe. There are only two species that pose any threat to humans at all. Of course, any spider bite is going to be painful, but if you identify the dangerous ones quickly, you should be fine. If you ever experience a severe reaction, get to the hospital immediately. Consider professional exterminators to get rid of spider infestations in severe cases, just to be safe. 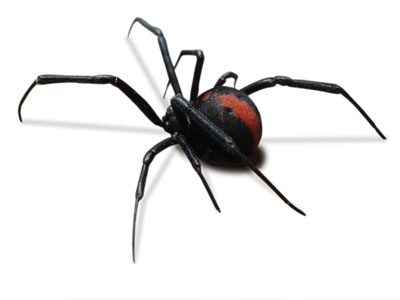 Redback Spider Female
A bite can cause server and persistent pain 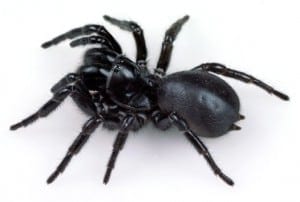