Do you have wasps? Are you concerned about wasp nest removal cost? Don’t be, because Jim’s can give you a free quote. Our techs servicing Adelaide and South Australia are experienced, fully trained, and insured. You can trust the Jim’s name to help you with any pest problem.

To get in touch with us about any wasp problem, simply call 131 546 and our friendly staff will take your details.

Wasp removal costs start at $120 for a simple, small nest. However, for wasps that are aggressive or difficult to access, the costs can be in excess of $300. You may be asking yourself, “How hard can it be to get rid of some wasps?” These may be famous last words if you decide to tackle these vicious pests yourself.

Wasps have extremely good vision that allows them to notice even the slightest movements. These movements may indicate bugs or other insects are close by, and ready for an attack. Their eyesight allows them to spot predators like birds as well. Birds will often swoop on nests to get a feed of wasp larvae hiding in the nests. For most of us, we rarely spot the impending danger which wasps present to us.

Wasp nest removal cost will depend on species

There are several different species of wasps in South Australia. However, only three species pose any real threat to people and pets.

Blue ant wasps are a beautiful looking wasp, being vivid blue in colour. Females of the species dig around in the garden and have no wings. Another “fun fact” is that often dogs will get stung by these solitary wasps when they go sniffing around the garden.

European wasps are common. They can cause issues to people as they have a habit of feeding in open soft drink cans. When you take a drink, you will swallow the wasp and it will sting several times on the way down. Their nests can be in the ground or in trees, and are usually quite large.

Paper wasps are another common wasp we see in Adelaide. They will typically build a nest under the eave line of houses. When you venture too close, they will attack to protect their nest, which is relatively small.

Treatments will vary for each of these three wasp species. Some will involve spraying the ground, others the eave lines. In the case of European Wasps, the nest will need to be duste

So, the cost of wasp nest removal will depend on what species you have. Your local Jim’s Pest Control tech will ask you several questions to work out what you have and then give you an idea of costs. 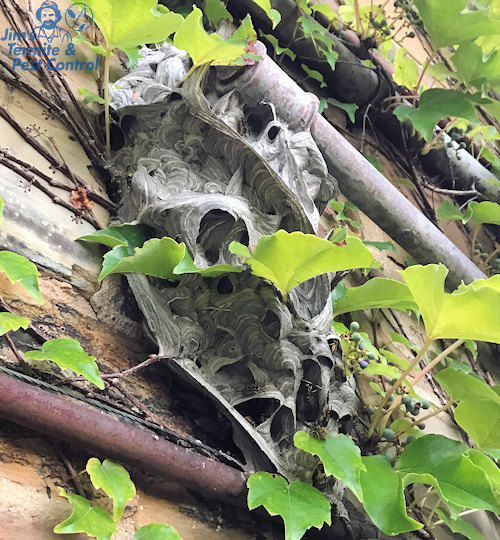 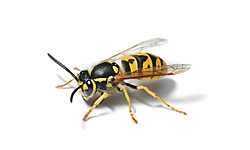 Wasps are often mistaken for bees

European wasps are often mistaken for bees. Jim’s Pest Control gets calls every week from people wanting to relocate bees. Yes, safe bee removal is a service we offer because we like to do our little bit for these precious creatures.

Sometimes clients report that these bees appear to have built a nest in the ground. Our techs immediately know that it is likely to be European Wasps and not bees they are dealing with.

Once you know what to look for it is easy to tell them apart. The easiest way is to look at the colour of their legs; bees have black legs and European Wasps have bright yellow legs. If it is a bit scary to get close to them for identification, just call Jim’s Pest Control and your local tech will be able to help.

You need a local wasp nest removal expert to help you with your pest problem. Please call Jim’s on 131 546, or use the contact form here to get in touch.